Github changed the way developers contribute to OSS projects, in particular by providing a single process of contribution, which is called pull-based model. Using this model, developers do not need to have write access to the repository in order to provide changes to the software. This kind of environment, together with its contribution model, encourages newcomers to participate in the process.

However, while some contributors want to have a key role on the project, some others do not share the same desire, although they still want to contribute nevertheless. In fact, it is well-known that popular projects have a restricted set of core developers, who drive the project, but also a broad set of “not that involved” developers, which are responsible for a long tail of small contributions.

Despite the growing number of newcomers interested in contributing to OSS, little is known about this particular kind of contributor: the casual contributor. In a study published on SANER’16, we investigate (1) how common casual contribtuors are, (2) what are the characteristics of their contributions, and (3) how they are perceived.

Here in this blog post, we will describe the main findings of the paper. If you want to know more about this research, consider reading the pre-print.

We conducted two surveys with 197 the casual contributors and 64 project maintainers. These surveys were aimed at understanding the motivation, the benefits, and the drawbacks of this kind of contribution. Given the opportunity, I would like to thank the 261 developers that answered the survey. Assuming that it took about 10 minutes to answer the survey, the combined effort amounts to 2 full days. As one reviewer said, “The big deal is the story in the survey part”. Thank you.

We observed that 65.8% of our respondents contribute to OSS at least once per month, and 75.2% of them are used to making casual contributions.

How common are casual contributors in OSS projects?

Figure below presents an overall picture of some of the studied projects. Each histogram groups the projects analyzed of each programming language. 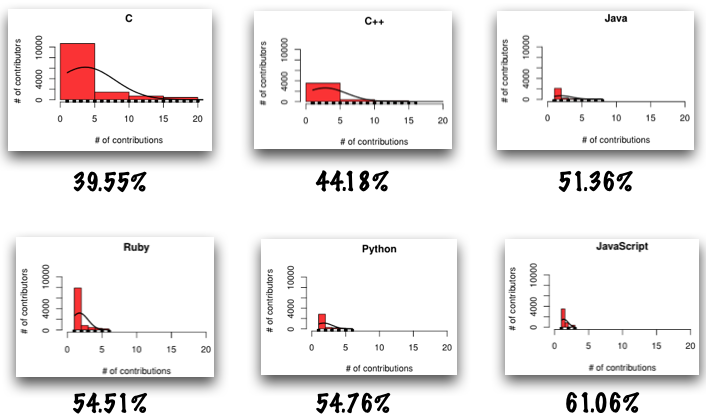 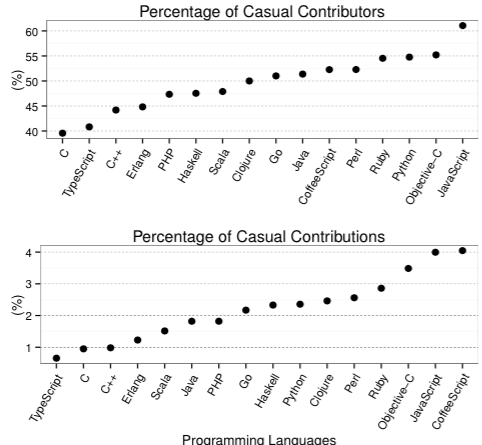 What are the characteristics of a casual contribution?

We also analyzed the contributions with the lowest number of additions and deletions. In fact, 22.7% of the casual contributions performed on Ruby projects changed a single line of code. Some of them include, (1) preventing a type from being null, (2) updating documentation files, or (3) setting an option to a default value.

Not among the top cited motivations, we found that four casual contributors reported that their motivation was improving the project. The following quotes clearly illustrate such motivation: “I want to improve the quality of the project”, “That the project is in better shape after my contribution”.

We also found people who reported that they do not contribute because of their limited skills or knowledge. Some also mentioned that the effort and knowledge needed to become a full contributor was too high. In both cases, they prefer to work on small or peripheral issues, which do not need specific abilities and usually require low effort. Like one of them said: “lack of skills (most of the low hanging fruit is gone)”. Project maintainers noticed this, and eight participants mentioned that code/project is hard to learn was a reason why casual contributors do not become more active.

We also asked the participants their opinion about the main benefits and problems brought by the casual contributors phenomenon. The overall impression is that the benefits overcome the drawbacks brought by this phenomenon. One quote from a project maintainter shows: “Every little piece helps everyone else. We stand on the shoulders of many small giants. Problems? None”.

On the other side, the most reported problems were Time spent by the core members to review newcomers’ code (reported by 12 people) and contributions may go unmaintained (reported by 5 people).